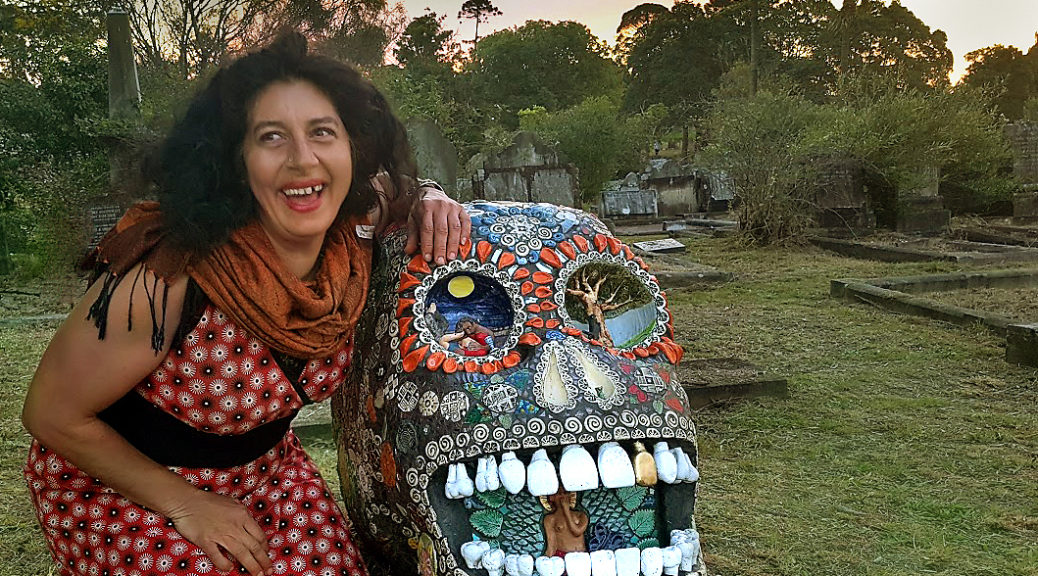 As a commemoration of Rookwood Cemetery’s 150th Anniversary, a collaborative art project was hosted on the site. ‘Hidden 2017 ‘ included 40 installations in a Rookwood Cemetery Sculpture Walk from the 26th August – 24th September.

My giant skull mosaic ‘the Storyteller’ filled the space between adjacent head stones drawing on Day of the Dead iconography.

The calavera is a common motif in popular culture. Immediately accessible and less bleak than a skull, it tells the unique story of a life once led. In this work I use individual and painstakingly created ceramic tiles as symbols of the eternal cycle of life; butterflies, the sun, leaves and sprouting plants. Combined with found objects; little pebbles and broken pieces of of treasured crockery. The flotsam and jetsam of our ordinary lives creates inexplicable patterns. The eye sockets contain miniature scenes like memories. A Momento Mori glittering light and colour that conversely reminds us to live our lives now. 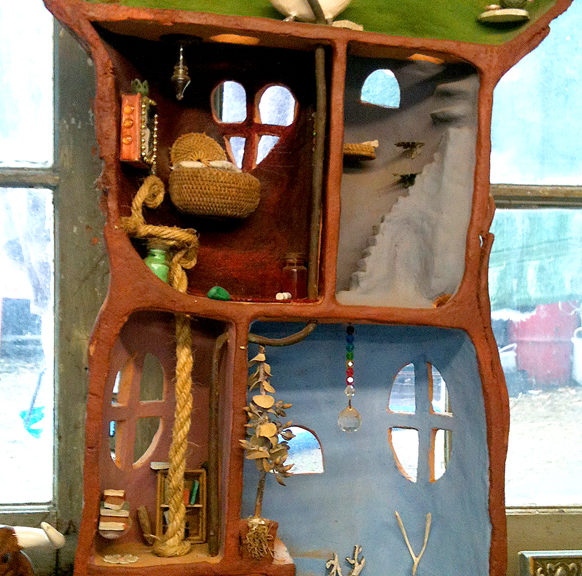 As  a collector (not a hoarder!) other peoples bits of work frequently find their way into my mosaics and sculptures. Through my teaching work I inherit many cast offs, gifts and accidental treasures which trigger the imagination and demand to be given life. Sometimes I hang onto a particular thing for ages waiting for that moment to happen. My  art making in this sense is essentially collaborative though ultimately produced in my own intensely solitary time and space. Mosaics are my bower bird like distillation of the flotsam and jetsam of these years of accruing. 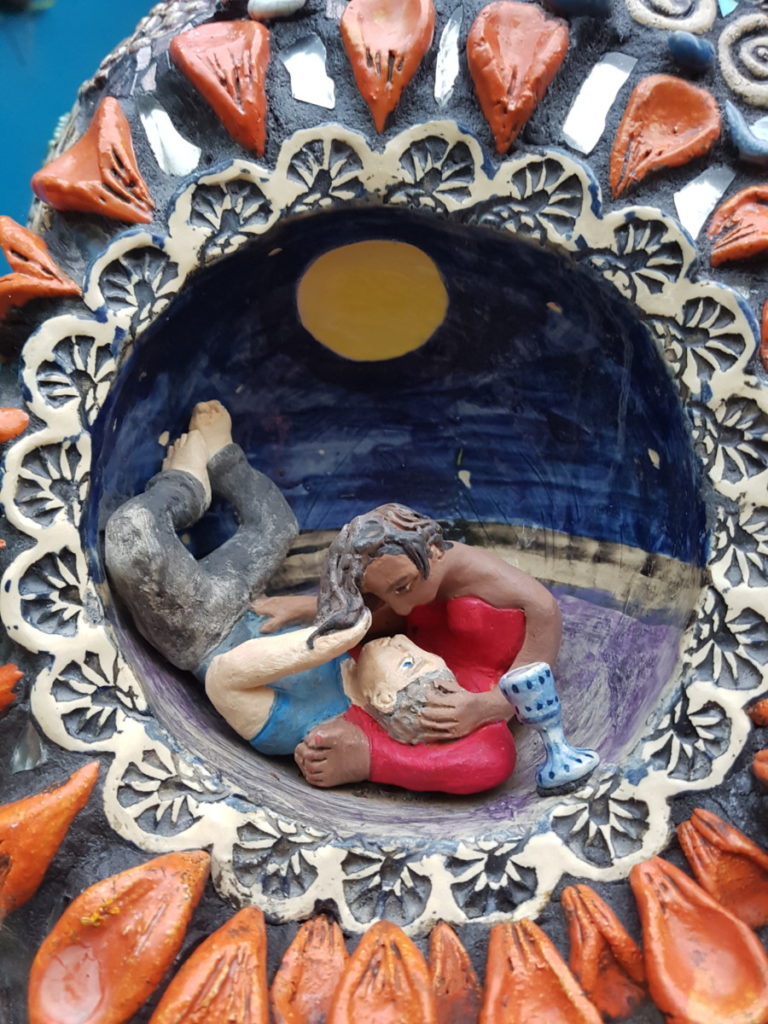 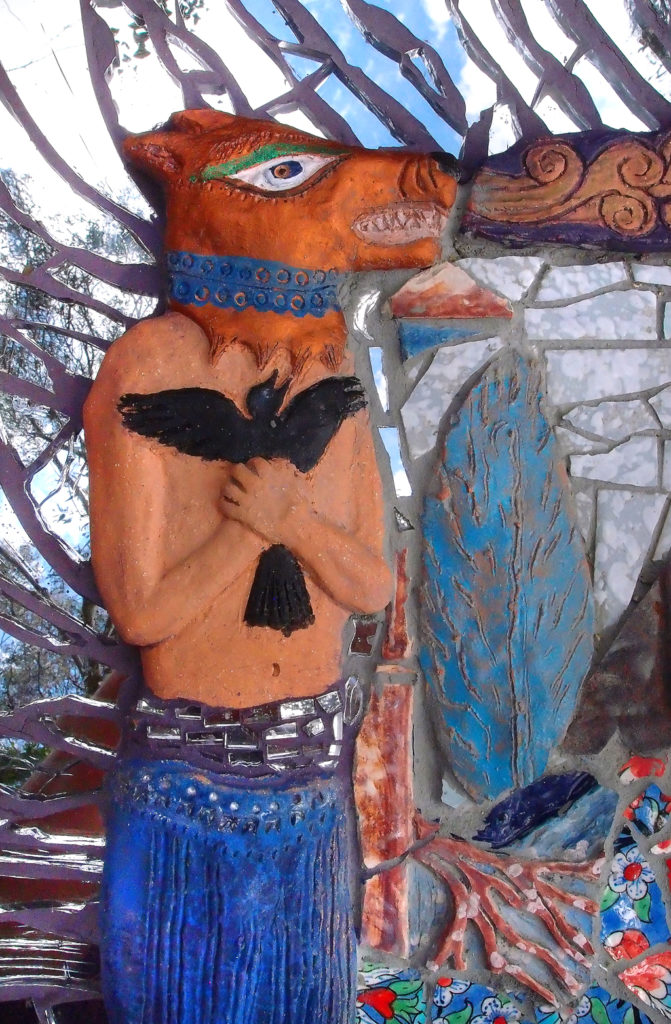 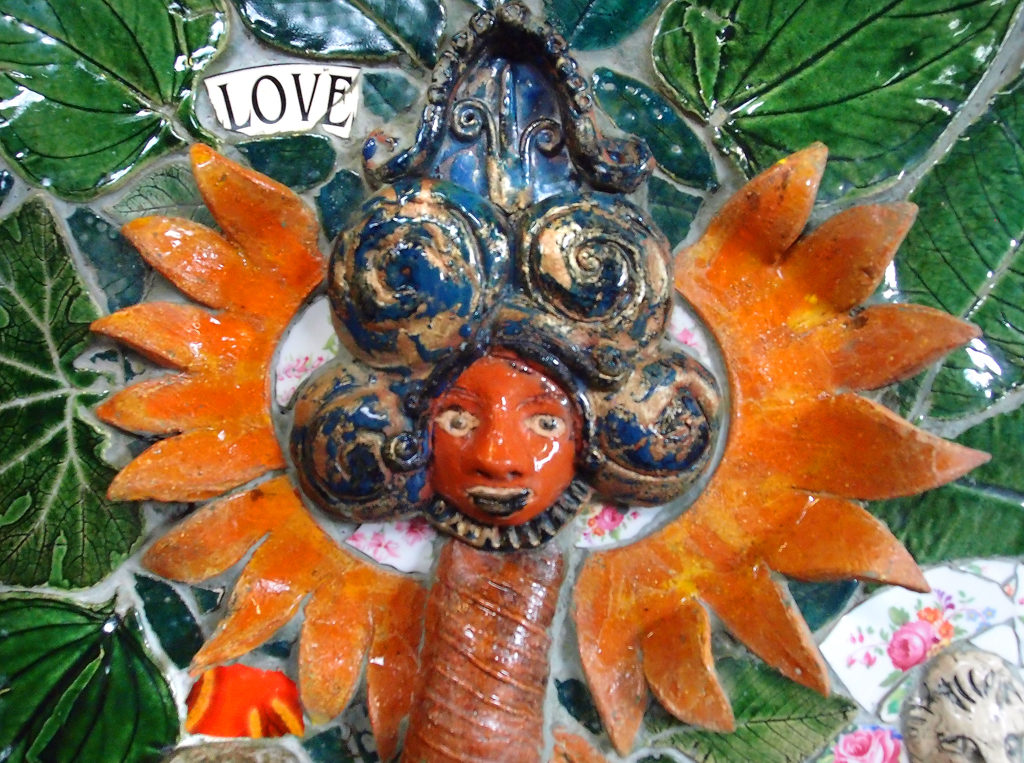 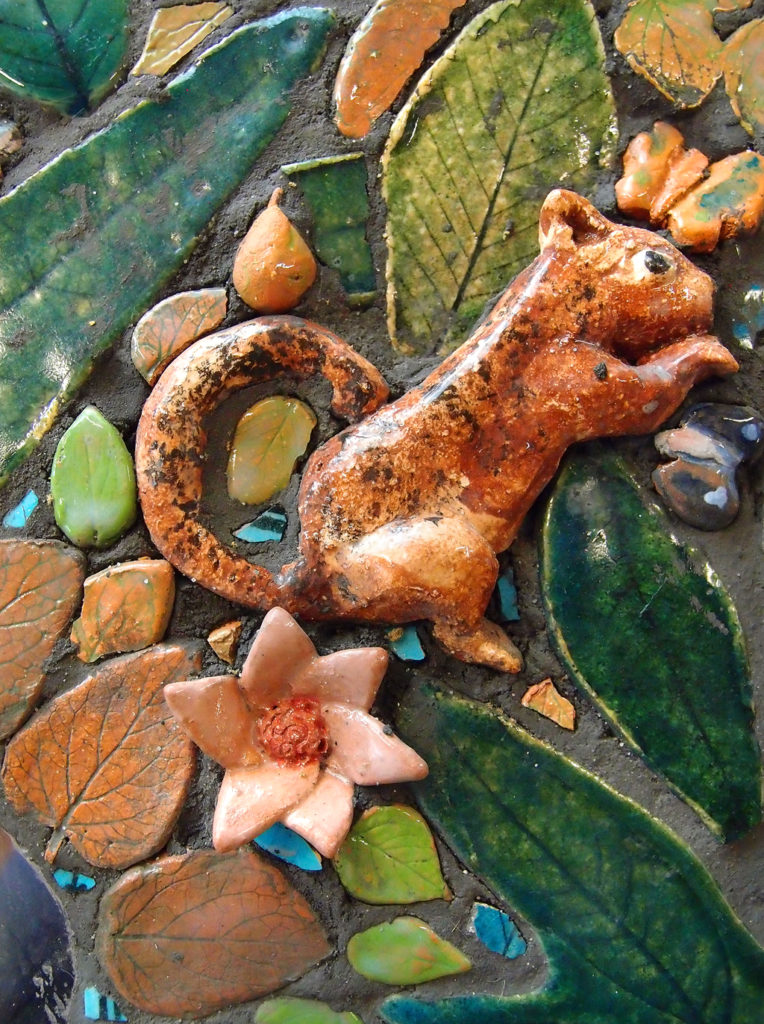 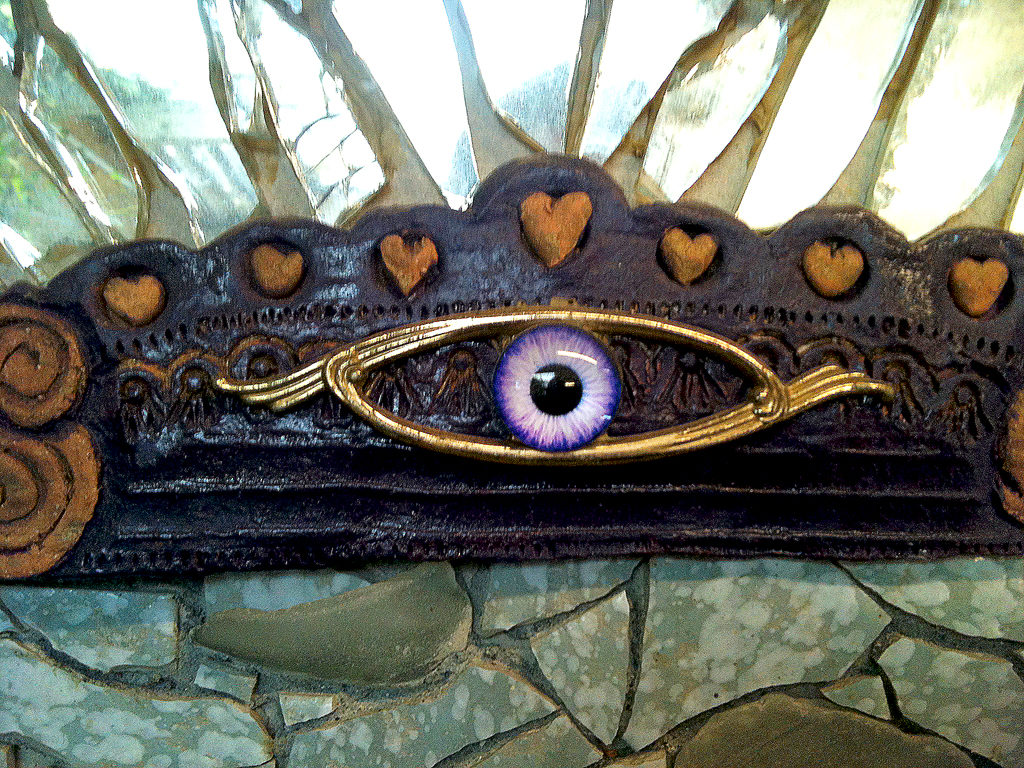 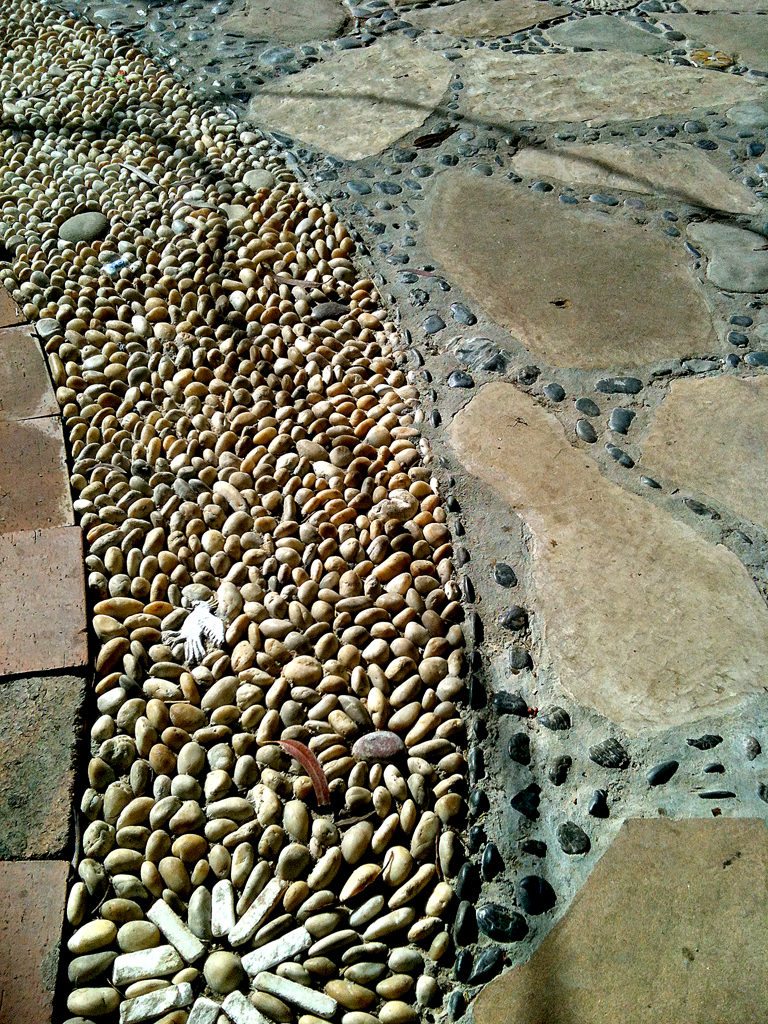 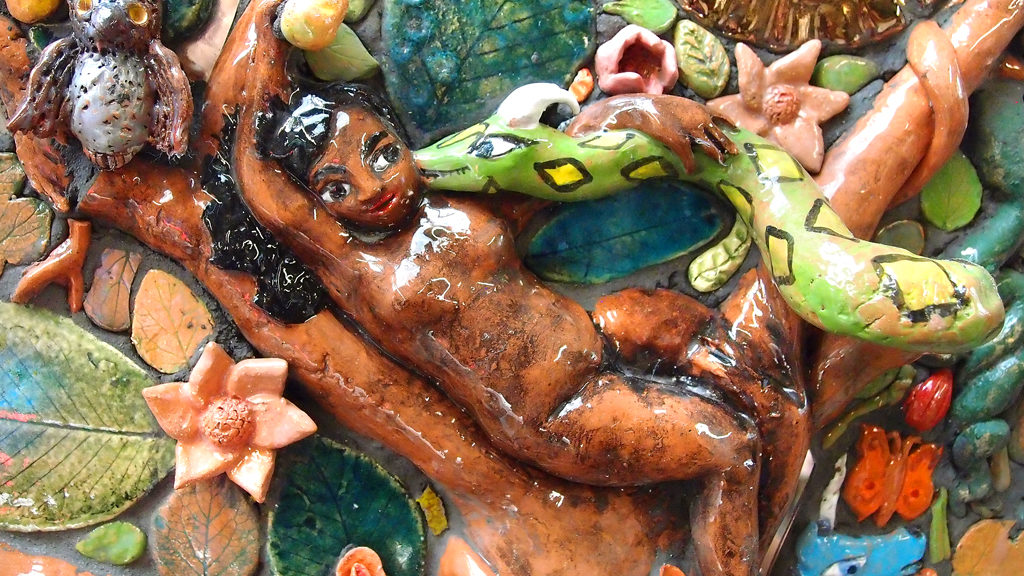 My ceramic mosaics are lyrical, figurative explorations which allow me to incorporate glass and other mediums along with found and up-cycled objects. This work combines the versatility inherent in the mosaic technique with the variability of surfaces from tabletops, to pots, to large styrofoam sculpted skulls, to picture and mirror frames, to walls and floors. No more crying over breaking a favorite bowl or tea cup! 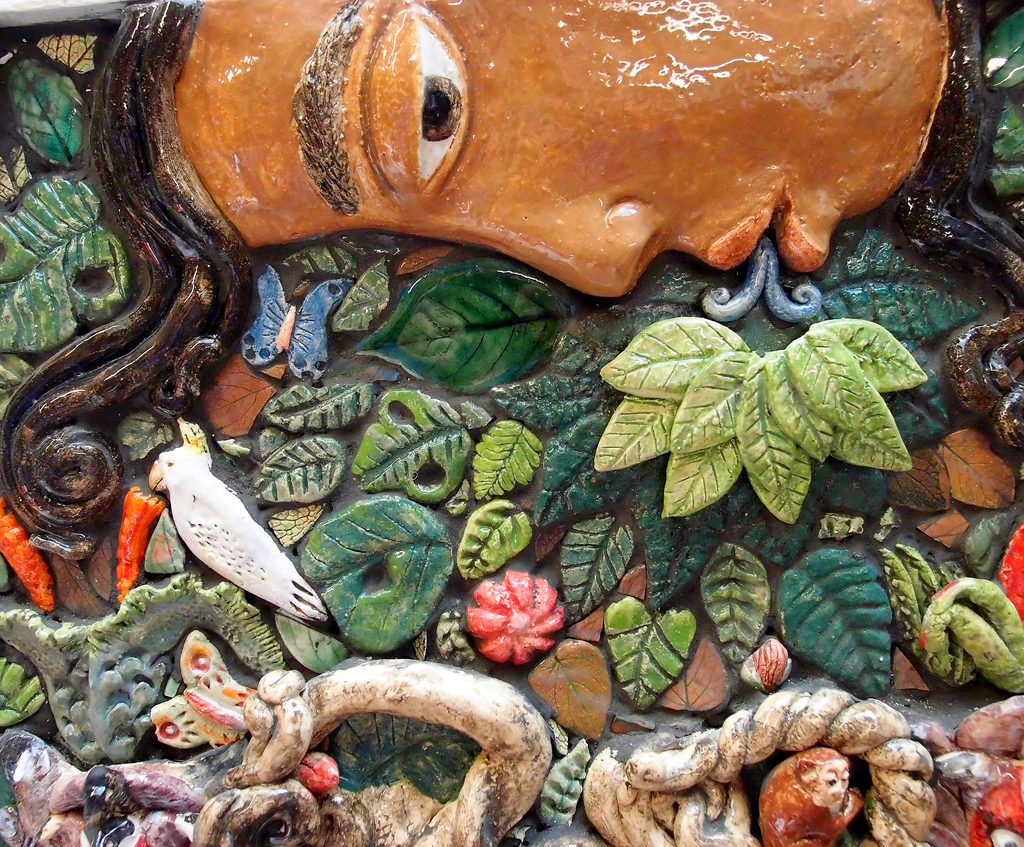 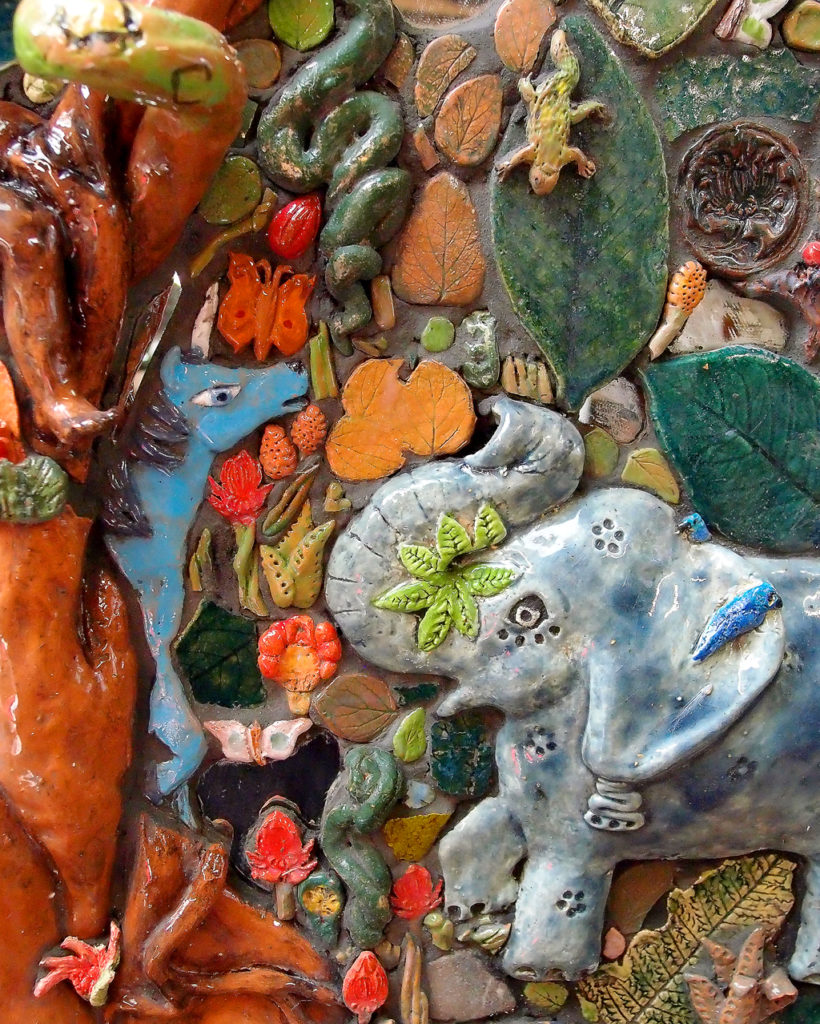 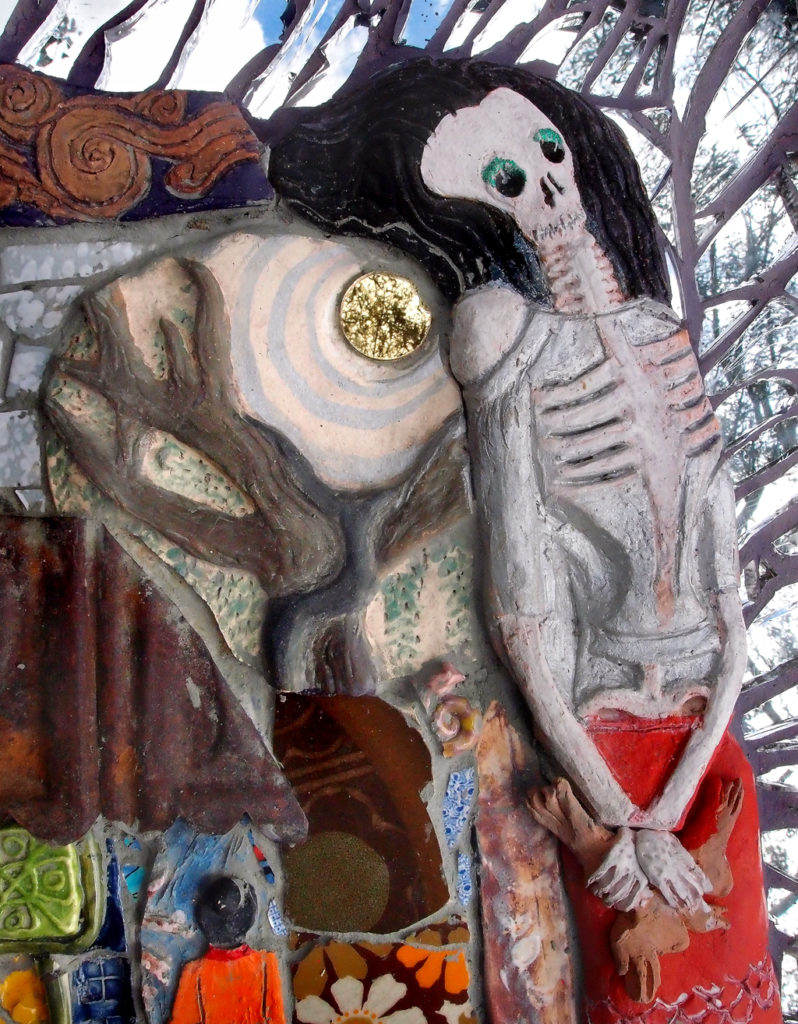 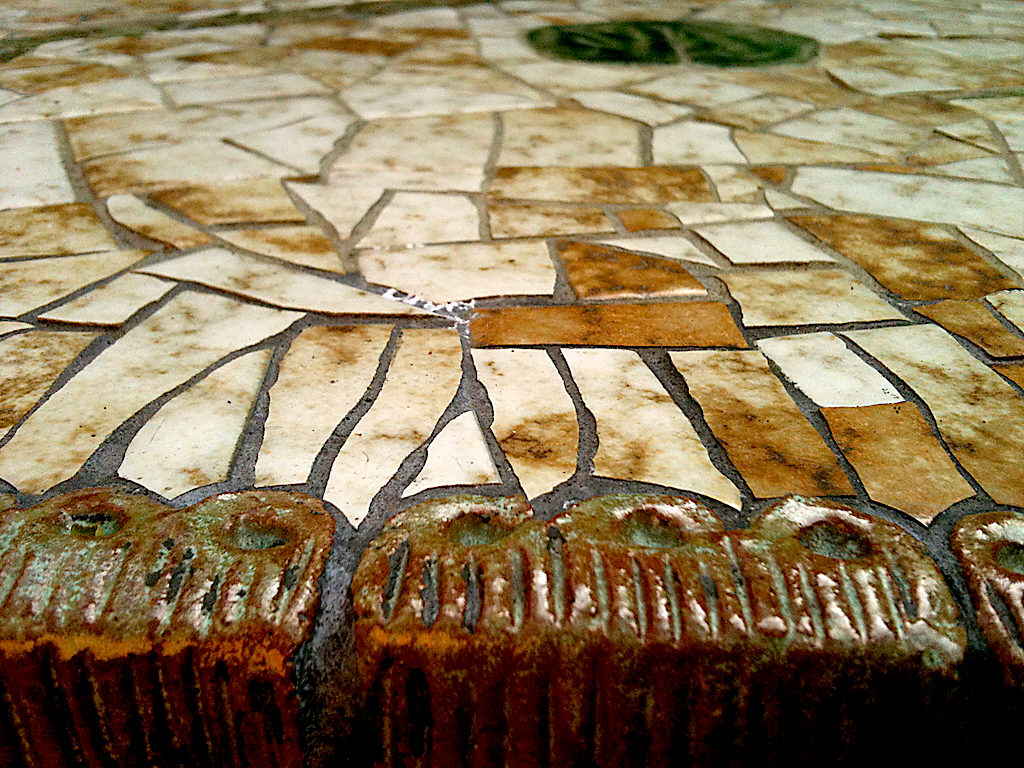 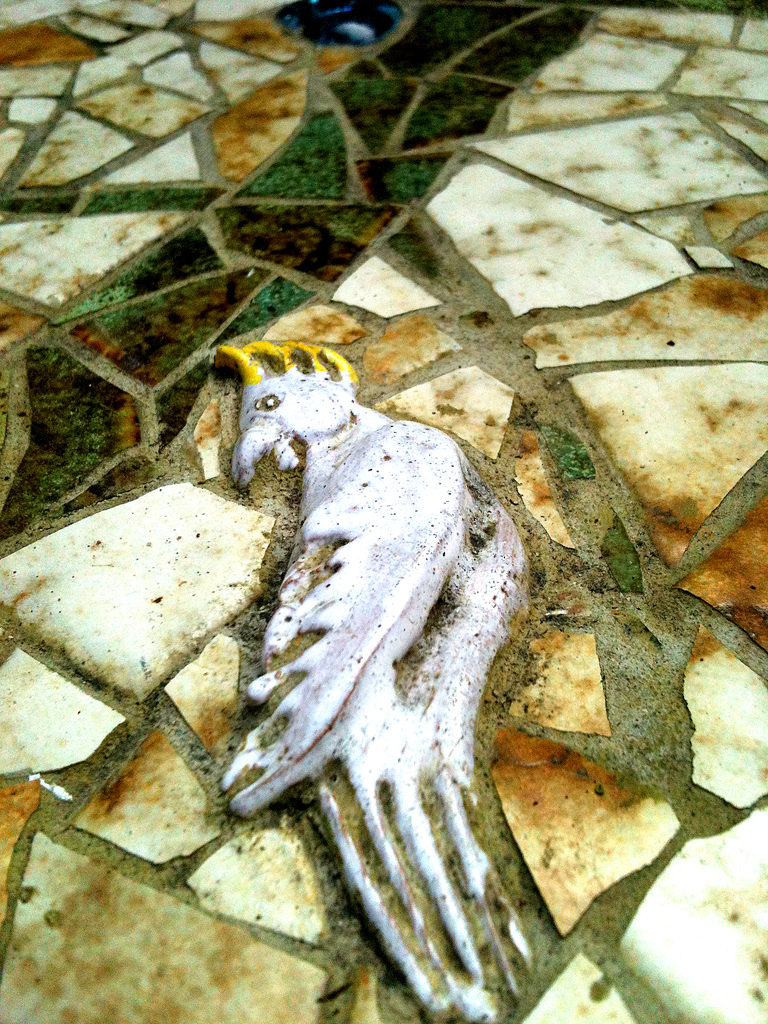 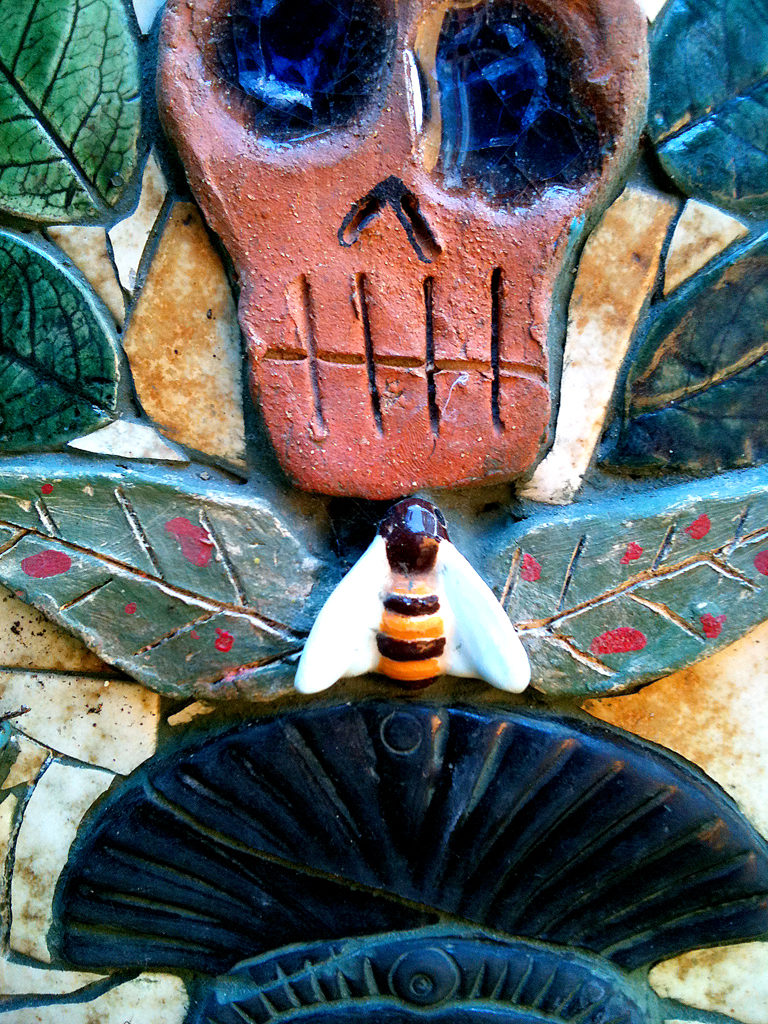 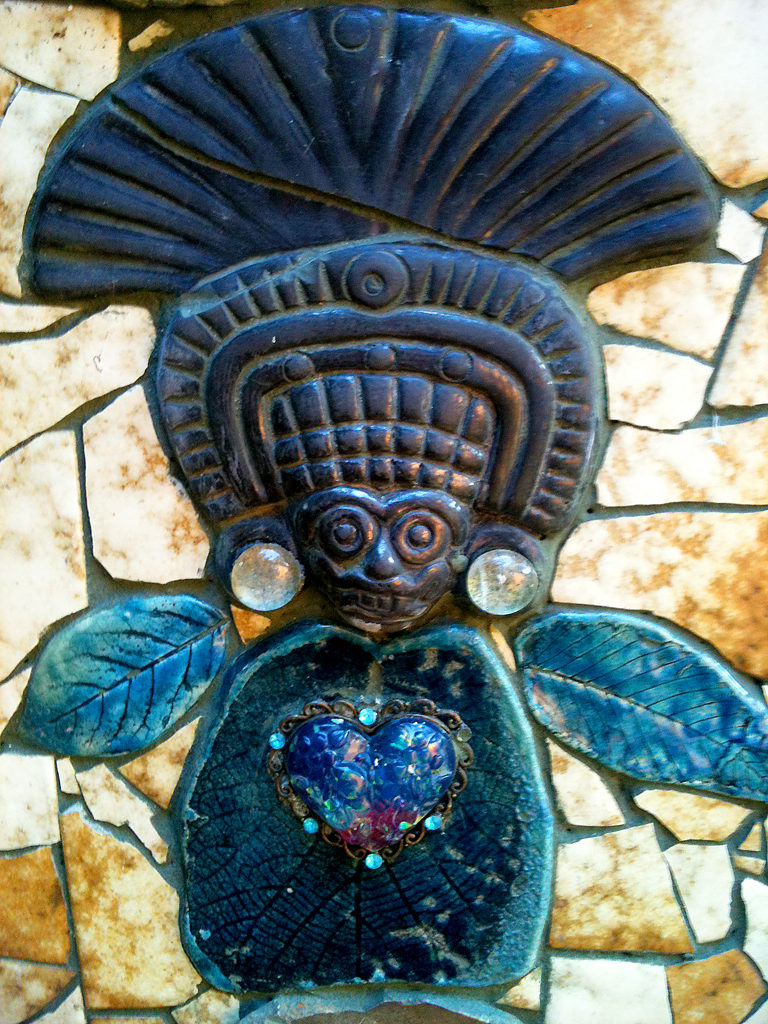 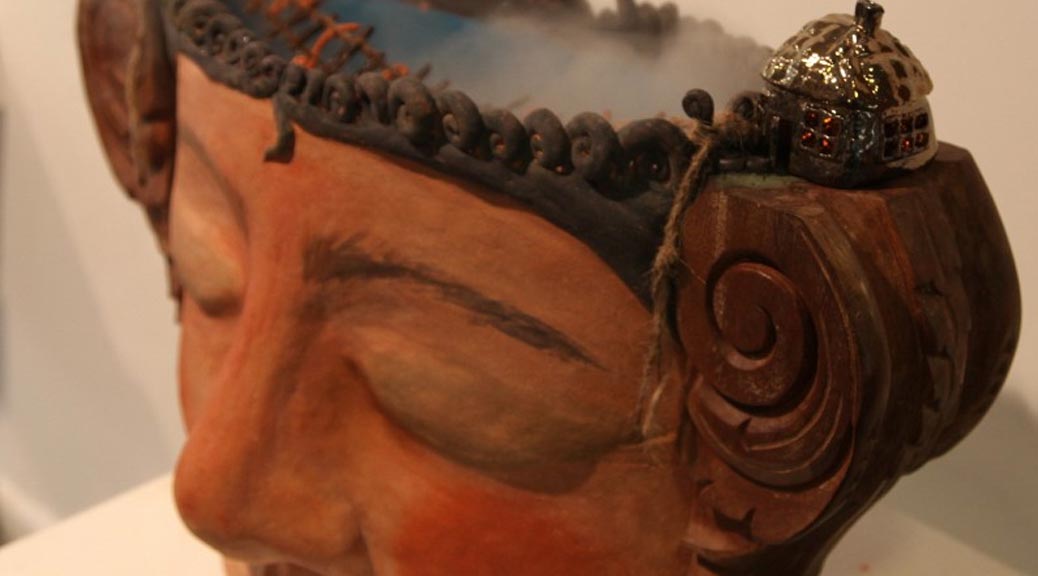 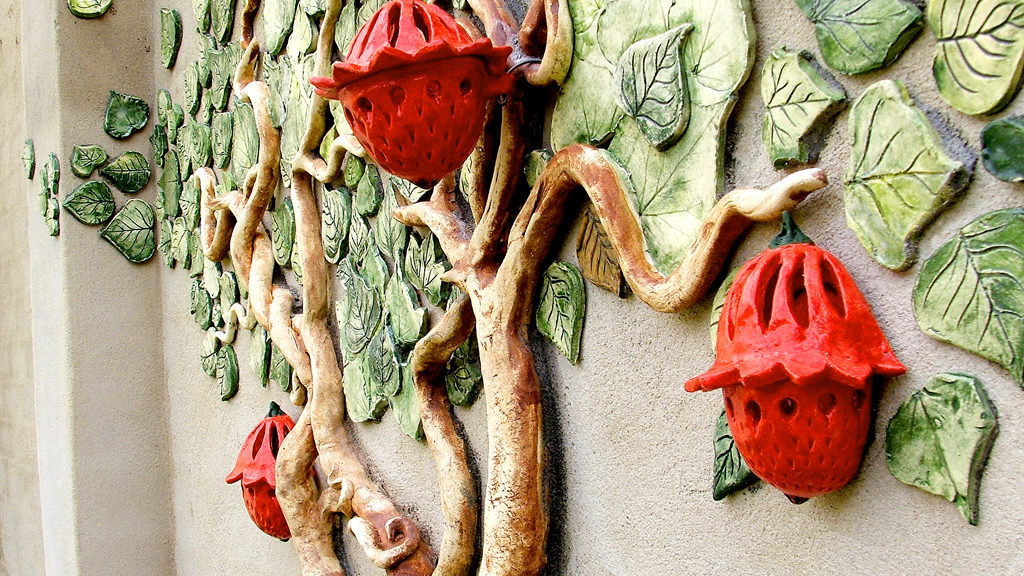 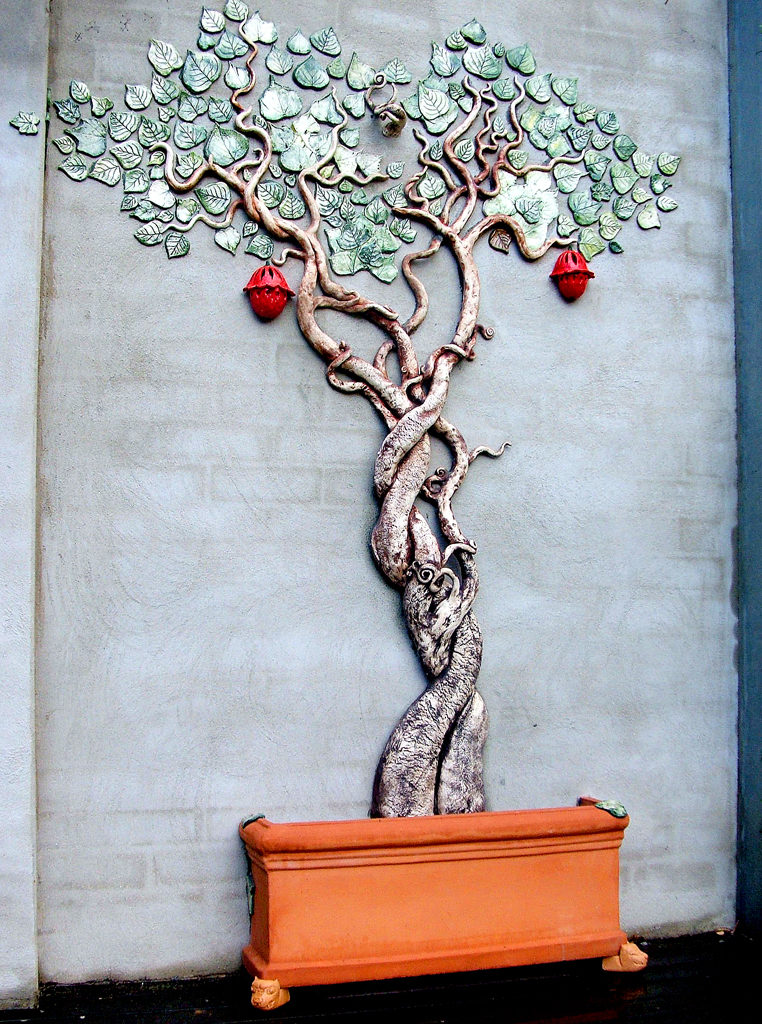 A commissioned wall piece from several years ago featuring leaves made by the client’s grandchildren. 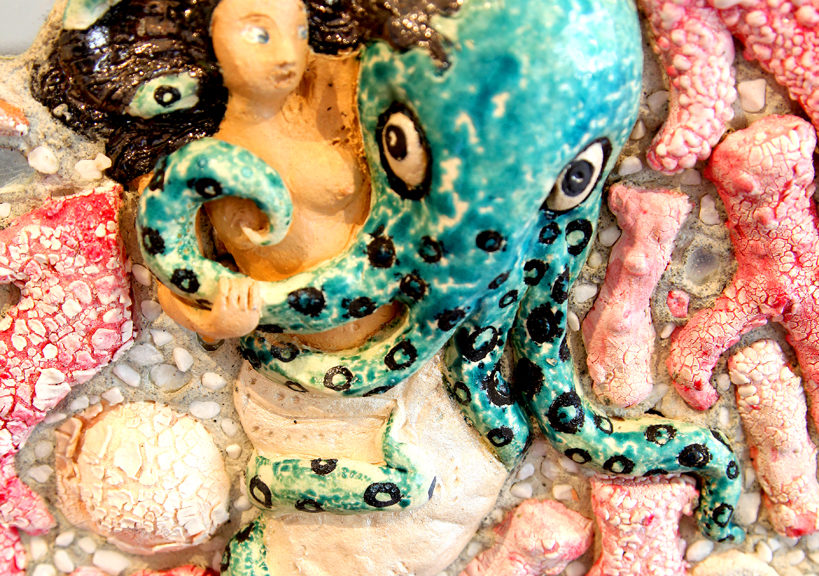 In 2012 I had a solo show at The Front called The Sunken City. It contained dreamlike objects encrusted with coral and other aquatic embellishments.

There were some  larger scale sculptures, like Coral Treasure and the Coral Mirror. Coral is a fascinating organism, it is a bioindicator of environmental change and such an intriguing mixture of plant,  animal and mineral. 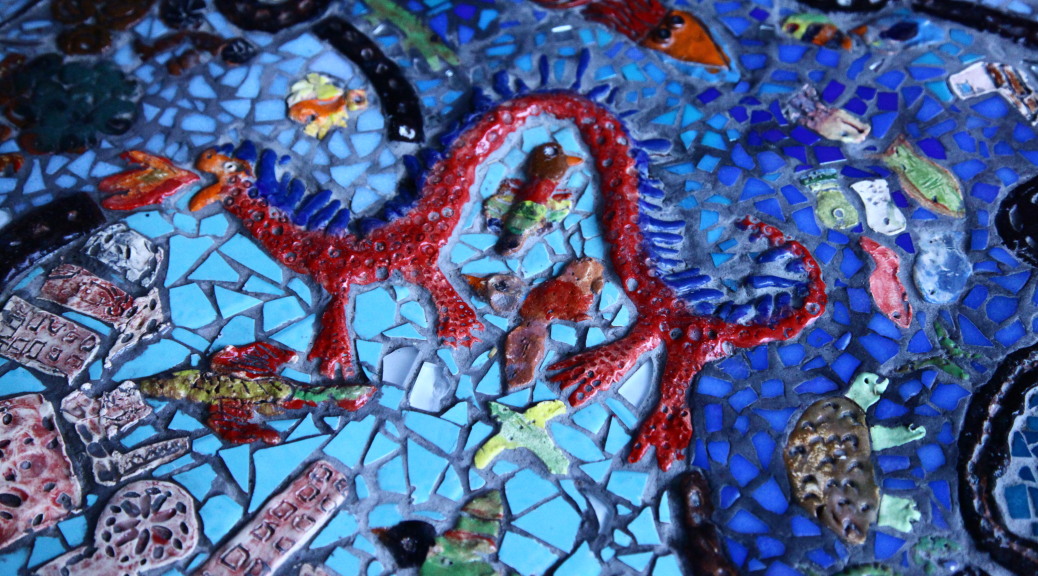 In October 2013 I won an Artist’s in Schools grant to develop and deliver an art project with a local school. Working with the students of Torren’s Primary we came up with a design for a mosaic table top covered with features of the city we live in- seen and imagined!

All classes were involved and worked on different aspects; the trees, animals, roads and roundabouts, buildings and landscapes

You could spend a lot of time looking at this table, the detail is amazing and as most of the tiles are made by children there is more imagination per square inch then your everyday public art work…